The Yuh table lamp is a design by GamFratesi for Louis Poulsen, is part of a collection of contemporary lights that stand out due to their simple and versatile design. The name Yuh is the phonetic form of ‘you’ and refers to the user’s possibility to adjust the lamps according to personal needs.

All the Yuh lamps feature a shade that can be rotated, tilted, raised and lowered along the vertical stand. They cast a cone of glare-free light downwards and a slice of ambient light upwards. What’s more, the Yuh lamps are dimmable and have a timer function – they can be adjusted to turn off in either 4 or 8 hours. The light source is a built-in LED module.

GamFratesi studio was founded in 2006 by Danish architect Stine Gam (born 1975) and Italian architect Enrico Fratesi (born 1978). The studio is based in Copenhagen, though Gam and Fratesi are continuously traveling between Italy and Denmark for development and research of new projects. GamFratesi has designed furniture and lighting fixtures to Louis Poulsen, Gubi, Hay, Fritz Hansen and Skultuna, among others. 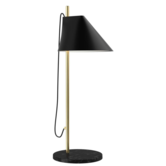