With the Menu Turning Table it is easy to keep the living room tidy: the storage space under the table cover can be used to store magazines, books and handicrafts, for example. The turning table is made of painted oak with an elegant metal structure under the table top. Turning Table collection is a design by Theresa Rand.

Theresa Rand is a Danish designer based in Denmark, who graduated from the Royal Danish Academy of Fine Arts in 2013. Theresa design mainly furniture and interior projects.

Studio Theresa Rand is based in Copenhagen and is working on furniture and interior design related projects. The focus of the studio's work is on the use of natural, authentic and lasting materials and the way in which they are combined.

Creating functional but poetic furniture with a story to tell, as well as spaces with a warm atmosphere for the people living and being in them. Theresa’s thinking is very intuitive – "Although functionality is very important, too, the atmosphere, which furniture and objects create and the impact, which they have on a space and on people using this space is crucial.

Alongside her studies, Theresa Rand worked as freelance with namely design offices, like Norm Architects or Space Copenhagen. That was when her first introductory pieces for MENU were sketched. 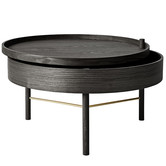