Hay's Pyramid coffee table 51 is a lighter version of the classic Pyramid table designed by Wim Rietveld in the 50s. A simplistic combination of a triangular steel frame and a sturdy, round oak top, Pyramid was considered a masterpiece in the use of sheet steel and has retained its fresh appearance to this day. Over the decades, Pyramid has been widely used in both public and private contexts.

This low Pyramid table is an attractive coffee table or side table in any interior.

Wim Rietveld (1924–1985) was a Dutch designer and son of the notable architect and designer Gerrit Rietveld. Like his father, Wim Rietveld carried on the tradition of groundbreaking furniture design. In the 1950s, Rietveld studied industrial design at the Hague Academy, and like many designers of the post-war era, he focused on functional minimalism with easily accessible materials. 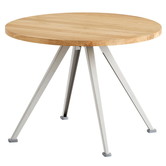