Artek's Armchair 42, also called Small Paimio, has the same lines as Alvar Aalto's legendary Paimio chair. The seat and back are made from one piece of birch plywood, and the armrests are also made from one piece - this ensures a stable and unchanging structure even as the chair ages.

Armchair 42 was created as part of the overall project of the Paimio Sanatorium under the direction of Aalto. Instead of using traditional metal pipes, Aalto wanted to use something warmer and more human. With this in mind, Aalto designed the Paimio chair in 1931, which was made of bent plywood and laminated wood. Armchair 42, Small Paimio, was released in 1932.

Alvar Aalto (1898-1976) is probably the most famous Finnish architect and designer in the world. In 1921, Alvar Aalto graduated in architecture from the Helsinki Institute of Technology and began his career as an architect. One of the most important works he was awarded was the planning of the tuberculosis sanatorium in Paimio, Finland. This project also marked the beginning of Aalto's career as a furniture designer - in fact, this was the first building planned by Aalto to be completely furnished with furniture designed by Aalto himself - including the lighting. Other important projects completed by Alvar Aalto include the Municipal Library of Viipuri, Villa Mairea, La Maison Carré and the Finnish pavilions for the 1937 Paris and 1939 New York World's Fairs. 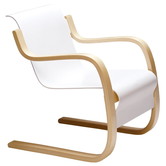