With this collection, Wang & Söderström wanted to blur the line between the digital and the physical.

The objects are first made digitally, then 3D printed and finally cast in porcelain or ceramic. The shapes arouse curiosity: "We wanted to give the objects organic shapes as if they were part of a plant or animal, but retain the unfamiliarity that comes from their digital roots. What makes them ordinary or strange depends on who looks at them," he said. the designers.

These beautiful ceramic vases from Hay are available in three versions. Of which 1 version with two narrow necks in which you can put flowers and has a ribbed surface, this is available in a light beige color.

The other two versions are both organically shaped and have a narrow neck and a wider neck. These are available in a soft yellow and an olive green color.

Wang & Söderström is a Copenhagen-based design duo consisting of Anny Wang and Tim Söderström. Wang (1990) studied spatial and furniture design at the University of Gothenburg, while Söderström (1988) studied architecture at the Royal Danish Academy of Fine Arts. They founded Wang & Söderström in 2016. 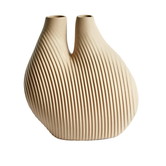