The 915 side table by Artek is a timeless design classic that Alvar Aalto designed for the Paimio Sanatorium in 1932. The table consists of two birch slat loops and two layers of pressed birch multiplex: the top layer functions as a table top and the bottom as a table particularly useful as a shelf for books and magazines.

The long sides bend gracefully upwards, which - together with the slat loops - gives the design its distinctive, streamlined appearance. The side table 915 is an elegant addition to any living room and bedroom.

Alvar Aalto (1898-1976) is probably the most famous Finnish architect and designer in the world. In 1921, Alvar Aalto obtained the degree of architecture at the Technical Institute of Helsinki and his career as an architect began.

One of the most important works he received was the planning of the tuberculosis sanatorium in Paimio, Finland. This project also marked the start of Aalto's career as a furniture designer - in fact, this was the first building planned by Aalto and fully furnished with furniture designed by Aalto itself - including the lighting.

Other important projects that Alvar Aalto has completed are the Viipuri municipal library, Villa Mairea, La Maison Carré and the Finnish pavilions 1937. 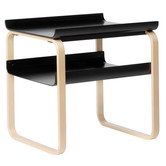