A timeless and functional design by Jean Prouvé, 1941.

The construction of the Tabouret Solvay clearly illustrates the basic principles of the construction of Jean Prouvé. As an engineer, he loved to visualize the structural and supporting elements of his furniture. Here you can see four powerful legs held by a central metal element. With its flat seat, the Tabouret Solvay can also be used as a side table.

Jean Prouvé completed his training as a metalworker before opening his own workshop in Nancy in 1924. In the following years he created numerous furniture designs and in 1947 Prouvé founded his own factory. Due to disagreements with the majority shareholders, he left the company in 1953. In the following decades, Prouvé served as a consulting engineer on a number of important architectural projects in Paris.

He left his mark on architectural history again in 1971, when he was instrumental in the selection of Renzo Piano and Richard Rogers' design for the Center Pompidou as chairman of the competition jury. Prouvé's work encompasses a wide variety of objects, from a letter opener to door and window hardware, from lighting and furniture to facade elements and prefabricated houses, from modular building systems to large exhibition structures - essentially almost anything suitable for industrial production methods. 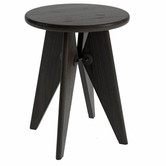