After the durability testing, Aalto shouted, "We will sell thousands of these" In this regard, Aalto was mistaken: more than 1.5 million have been sold since then.

Alvar Aalto's stackable stool from 1933 is one of his most simple and affordable designs.
Stool 60 was originally designed for the Viipuri Library in Finland, and was presented at Fortnum & Mason in London shortly after.

The stool 60 from Artek is a 3-legged stool, and is available in 16 versions with a colored seat. In addition, there are versions in completely white birch, black or white, or with a seat made of black linoleum or white laminate and clear lacquered legs. The Stool 60 has a height of 44 centimeters and a diameter of 38 centimeters.

Note: Shipped unassembled in a Carry Away package.

Alvar Aalto (1898-1976) is probably the most famous Finnish architect and designer in the world. In 1921, Alvar Aalto obtained a degree in architecture from the Helsinki Institute of Technology and started his career as an architect.

One of the most important works he got was the planning of the tuberculosis sanatorium in Paimio, Finland. This project also marked the start of Aalto's career as a furniture designer - in fact, this was the first building planned by Aalto that was fully furnished with furniture designed by Aalto himself, including the lighting.

Other important projects completed by Alvar Aalto include the Municipal Library of Viipuri, Villa Mairea, La Maison Carré and the Finnish Pavilions for the 1937 Paris and 1939 New York World's Fair. 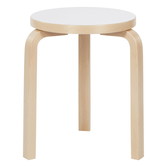