GUBI’s Pacha Outdoor ottoman is an outdoor version of a delightful design classic by Pierre Paulin from 1975. The generous, soft design of Pacha Outdoor guarantees relaxed, comfortable seating, and the friendly, clean-lined silhouette suits many types of decor styles and outdoor furniture.

The French designer has managed to give a real elegance to this one with the rounded shapes of the Pacha pouf. Pierre Paulin explored the modern way of life that came into vogue to sit on the floor.

With comfort as the constant starting point in his designs, the curvaceous, whimsical and organic shapes of the Gubi ottoman are designed to offer the user both comfort and coziness. The ottoman looks just as contemporary today as when it was first designed in 1975 and is an honest, functional piece of furniture that brings life and character to any interior environment.

The Pacha ottoman from Gubi has a width of 72 centimeters, a depth of 70 centimeters and a height of 37 centimeters.

The ottoman can be covered with fabric or leather, the base (plateau) comes in a Ral pearl gold or black variant.

Legendary French furniture designer Pierre Paulin (1927-2009) bestrode the 1960’s and 70’s with his recognizable and innovative style that instantly revolutionized everyday furniture. He studied at the École Camondo design school in Paris, where his teacher urged him to join Marcel Gascoin’s workshop. There Paulin took in Scandinavian aesthetics and gained great insight in the role that design could play in society.

Through the 1950’s Pierre Paulin moved on to design furniture on his own and he began to experiment with stretchy, extensible fabrics that could be drawn across a chair’s armature. He started successful collaborations with Thonet France and Artifort, where the latter resulted in several iconic pieces such as the Mushroom, Ribbon and Tongue chairs, all of which have become sought-after design classics.

A joyful modernist, Paulin’s low-slung pieces provided a new laid-back perspective on life and his forward-looking, eclectic and sculptural approach to furniture design instantly caught the mood of the swinging 60’s. The hedonistic, sinuous style of Paulin’s design also attracted the patronage of presidents Georges Pompidou and François Mitterrand, who asked him to redecorate parts of the Elysée Palace in the 1970’s and 80’s.

Widely recognized, Pierre Paulin’s innovative designs can today be found in contemporary art and design collections around the world, from the Museum of Modern Art, New York to the Victoria and Albert Museum, London along with the National Centre for Art and Culture Georges Pompidou in Paris. 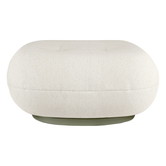