The Model 2065 pendant light by the lighting brand Astep is a minimalist luminaire designed by Gino Sarfatti in 1950. At that time, the most common material of the lighting industry was glass, but Sarfatti got a chance to experiment with a new kind of material, methacrylate, which is significantly stronger and lighter than glass.

The Model 2065 pendant lamp is composed of two joined saucers that merge into a round, flat diffuser. Five LED lamps make the pendant light bright enough for larger spaces as well, and the thin wire and black, stick-like base give the lamp its finishing touch. The luminaire has been manufactured in Italy.

The Italian designer Gino Sarfatti (1912-1985) was a master of lighting design and founder of the lighting brand Arteluce. Sarfatti was born in Venice and moved to Genoa to study aeronautical engineering until he had to interrupt his studies due to the war in the late 1930s. Sarfatti founded Arteluce in Milan in 1939.

In 1943 he and his family had to flee from Italy to Switzerland, but after the war they returned to Milan to reorganize the production of Arteluce. The 1950s were a golden age for Arteluce: in 1954, two of Sarfatti's lamps were awarded the Grand Prix at the Milan Triennale and in the following two years his designs received the Compasso d'Oro prize. In 1973 Sarfatti sold Arteluce to the Italian lighting manufacturer Flos, which continues the production of Sarfatti's design classics. 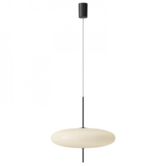