The Eames Plastic Side Chair DSS-N is the re-edition of the legendary "fiberglass chair", originally designed for the "Low Cost Furniture Design" competition by the Museum of Modern Art in New York.

The frame of the Eames Plastic Side Chair DSS-N by Vitra is made of chrome-plated steel - optionally with or without a coupling element that allows you to link chairs together to create rows of chairs. The seat of the DSS-N is made of polypropylene. You can choose from different colors for the color of the seat shell, in addition to white, we also have this chair in shades of red, mauve and black.

Among other versions, the Eames Plastic Side Chair by Vitra is also available with wooden legs, known as DSW, and with a four-legged base made of tubular steel, known as DSX.

Ray and Charles Eames were an American designer couple whose name is known to anyone with an interest in modern design. Charles Eames was born in 1907 in St. Louis, Missouri. He studied architecture at the University of Washington and, at the invitation of the Finnish architect Eliel Saarinen, continued his studies at the Cranbrook Academy of Arts, Michigan in 1940. There he met Eero Saarinen, with whom he entered a competition called " Organic Design in Home Decor" organized by MoMA in New York. Eames and Saarinen won the competition using a plywood molding technique originally developed by Alvar Aalto. In Cranbrook, Charles Eames also met her future wife Ray, and the couple married in 1941. 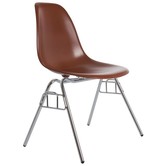