The Vitra DRS chair has a simple and beautiful organic design, this chair has become an example for many designers for a chair with a fixed seat shell and a variable base. This variant without arm and with so-called 'Eiffel base' in chrome is available in 14 colours. The chair comes standard with a black felt glider for the hard floor.

As the average body height has increased over the past 60 years, Vitra decided in 2016 to increase the seat height by 2 centimeters. In addition, the backrest has been moved forward by 2 degrees, so that the position again perfectly matches the dining table of this time. Finally, the seat shells are now also available in 6 additional colours, which have been selected by Hella Jongerius.

Ray and Charles Eames were an American designer couple whose name is known to anyone with an interest in modern design. Charles Eames was born in 1907 in St. Louis, Missouri. He studied architecture at the University of Washington and, at the invitation of the Finnish architect Eliel Saarinen, continued his studies at the Cranbrook Academy of Arts, Michigan in 1940. There he met Eero Saarinen, with whom he entered a competition called " Organic Design in Home Decor" organized by MoMA in New York. Eames and Saarinen won the competition using a plywood molding technique originally developed by Alvar Aalto. In Cranbrook, Charles Eames also met her future wife Ray, and the couple married in 1941. 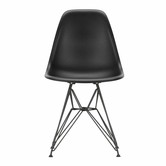