The design of the Allez chair refers to French city life and bistro culture that emerged at the end of the 19th century and has since become a popular way of life around the world.

The Allez chair by Normann Copenhagen has a light yet sleek appearance, and the design emphasizes recognisability. The organic curves of the backrest mimic the body shape, and the lower part bends along the seat, which, together with an additional reinforcement in the backrest, ensures optimal firmness and seating comfort.

The designer's distinctive principles of honest design, adapted to the needs of the time, have clearly contributed to the design of the Allez chair.

This chair has a seat made of molded synthetic wickerwork. The materials have been chosen in such a way that the chair can also be placed outside on the terrace or in the garden. Due to the light materials, the chair weighs only 3.6 kg and is easy to move from, for example, the balcony to the dining table.

In addition to private homes, the Allez chair is easy to place in a variety of public settings, such as the bistros that served as inspiration.

Simon Legald (born 1986) is a Danish designer. Legald graduated in the summer of 2012 and already has several of his own designs in production. When asked about his own style and design aesthetic, he describes them as "honest with Scandinavian simplicity". 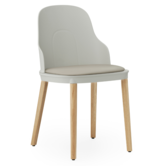